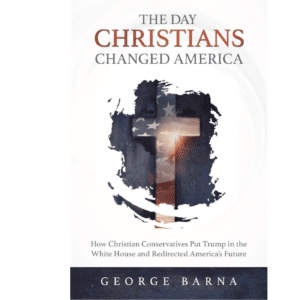 When Donald Trump announced his candidacy for the presidency, Christian conservatives did not pay much attention. They already had a full slate of evangelical candidates to choose from, and Trump was not their kind of leader.

The time between his announcement at Trump Tower and his controversial victory 17 months later was one of the wildest rides in political history. Christian conservatives, consistently caricatured and misrepresented by the media, and a group whose highest priority in a candidate is godly character, were largely responsible for his shocking triumph. The outcome on November 8 can be understood in a simple way: it was a miracle!

The Day Christians Changed America – How Christian Voters Put Trump in the White House and Redirected America’s Future by bestselling author and respected pollster George Barna provides the fascinating, untold story of how faith changed the nation’s history through this unprecedented election.