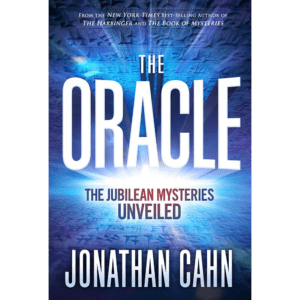 The Oracle: The Jubilean Mysteries Unveiled

The Oracle will reveal the mystery behind everything…the past, the present, current events, even what is yet to come! Open the seven doors of revelation—and prepare to be blown away!

Jonathan Cahn unveils The Oracle, in which he opens up the Jubilean mysteries and a revelation so big that it lies behind everything. The Oracle will uncover the mysteries of The Stranger, The Lost City, The Man With the Measuring Line, The Land of Seven Wells, The Birds, The Number of the End, The Man in the Black Robe, The Prophet’s Song, The Matrix of Years, The Day of the Lions, The Awakening of the Dragon, and much more.

Discover the ancient scrolls that contain the appointed words that have determined the course of world history from the onset of modern times up to our day. The Oracle will reveal the secret that lies behind end-time prophecy and the mystery of the end of the age.